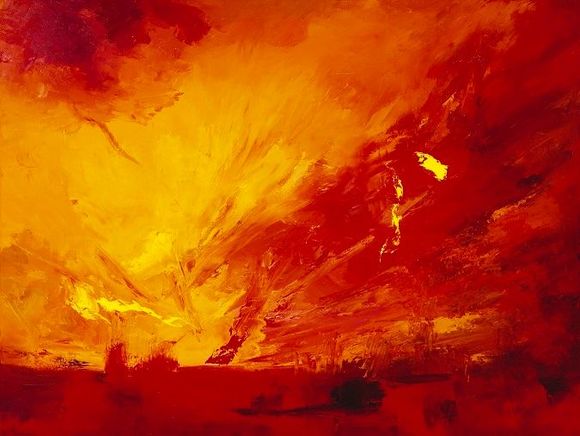 Named one of the TOP 60 Masters of Contemporary Art for 2020 by Art Tour International Magazine.
February 12-16 - Art en Capital - Grand Palais, Paris, France  -  exhibited alongside Salon des Artistes Independants with Open Art Code group
NOTE:  Due to CoVid - 19, all the other shows that had Griffith paintings were to be in.....Cancelled or postponed til 2021.

2018
December  -  Named   one of the most important  artists to watch by Viviano Puello, Chief Editor of Art Tour International
Magazine.  This magazine is one of the most well-respected publications in the art industry.  It has over 2.1 million readers in over 192 countries. It is the fastest growing art magazine in the international market and is published 4 times per year.
November 13 - 25  - Chianciano Biennale in London - Gagliardi Gallery - London, England (35 artists)
October 22-24  -  Art of The Americas,  Ottawa City Hall, Ottawa, Ontario, Canada   (Kay Griffith and LeRoi Johnson were the two artists from the U.S.A. who were invited to participate in this show.)
August 11 -  September  --  Biennale  Chianciano  2018  -  Chianciano Art Museum, Chianciano, Italy   (Griffith was invited to participate in this exhibition by the International Confederation of Art Critics. Only 100 artists from 40 nations were invited.)
April  --   Group Exhibition at the Texas State Capital  ( Griffith was included in “The Amazing Creativity of Salado Art Show , an art show meant to showcase the best artists in Salado.)  Salado ( town in which I have my studio) has been designated as an art and culture center for the state of Texas.(USA)
February  --   Named one of the Top 60 Contemporary Artists in the world by Art Tour International Magazine

2016
December  -  Special juried exhibition Art Fusion Galleries  --  Miami Art Week (also known as Miami Art Basel Week) Miami, Florida, USA
October 19-26  -  Art of The Americas Exhibition  -- Terra Art Gallery, Lima, Peru
May  -  Named one of the Top Sixty Contemporary Artists for 2016 by international jury.  The awards ceremony was held May 21, at the Chateau St. Martin De La Garrigue in southern France.  During the ceremony it was announced that the magazine had assembled another international jury of art experts from Canada, Brazil, and Italy to select the top 15 artists out of the 60.  Griffith was honored as one of the top 15 contemporary artists.

2015
International Art Competition hosted by Art Fusion Galleries (included all styles of painting and sculptures)  Judging was “blind” and by international jury.  Griffith abstracts placed 4th in a field of about 2,000 international artists
Nov/Dec  -  Special juried exhibition at Art Fusion Galleries during Miami Art Week
October  -  Art en Capital  -  Grand Palais,  Paris, France     By invitation, exhibited alongside Salon des Artistes Independants with Open Art Code group
July 9-20  -  Art of the Americas Exhibition   -- the Carrier Gallery,  Columbus Centre, Toronto  during the 2015 Pan American Games in Toronto, Canada. ( One artist from each country participating in the Pan American Games was invited to represent that country.  Kay Griffith was the one artist asked to represent the U.S.A. at this event.)
March  -  Griffith was chosen by an international jury to be included in Art Tour International Magazine’s Top Sixty Contemporary Artists for 2015 .  An additional  international jury chose specific paintings for special awards at the awards ceremony in Florence, Italy.  Kay Griffith Abstract U-312 was named the recipient of ATIM’s Timeless Award “Honoring Creativity and Excellence in the Arts”.  [Art Tour International Magazine is a leading international collector and investor art magazine with over 2.1 million readers in over 192 countries. )

2014
Honorable Mention  --  in an international art competition hosted by Art Fusion Galleries and including wide range of style of painting and sculptors  [artists names were blacked out and international jury ], Kay’s abstracts were awarded honorable mention and placed 14th overall out of 2,000+ entries.
December  --  One of 59 artists juried into special exhibition at Art Fusion Galleries in Miami   held during  Miami Art Week
November 25 - 30  -  Art en Capital - Grand Palais, Paris, France   One of 29 artists who were invited to show alongside the Salon des Artistes Independants  as part of Open Art Code
July  --   Included in Art Tour International Magazines Top 60 Masters of Contemporary Art
Accepted the invitation to join Open Art Code, Florence, Italy [ “ Open Art Code represents a group of artists who have very different styles, techniques, artistic training and for many years now, they have exhibited together worldwide.  The complicity they have acquired at these various international shows, allows them to participate at extremely prestigious exhibitions and events.”  Quote by Dominque Chapell, President of the Socety of Independent Artists and Vice President, Art Capital 2014]
Group Shows, Art Fusion Galleries, Miami, Florida
May 2 – June 3  -   "Stars From Heaven"   Amsterdam Whitney International Gallery, New York, New York -  Group Exhibition

2012
December 20-22  -  World of Art Showcase   -  Wynn Resort, Las Vegas, Nevada - USA   [This show marked the first time that Kay Griffith submitted work to a jury for an international show.]
Prior to 2012 Kay Griffith focused on selling her paintings in her local and regional areas.  She made the decision to take her career into global markets in 2012 and set out on the path by submitting her portfolio to the international jury for the international show scheduled for late 2012. The show was organized by owners and executives of Jerry's Artarama.  Approximately 80 artists from around the world were juried into the show, almost all with national and/or international name recognition. This prestigious gathering of artists attracted art critics. One of the art critics was extremely impressed with  Griffith abstracts and interviewed her.  Soon after returning home to Texas, Griffith received an invitation to submit a portfolio to the curatorial committee of an international fine art gallery in New York City.  Her international art career was taking flight.

Kay's pursuit of excellence and artistic success never waivers.  She has intense focus on becoming the best and most successful artist that her talent and determination can accomplish both at home and internationally.  She has collectors in Australia, Brazil, Canada, England, and Italy; as well as in her home country, the U.S.A.

Griffith has her studio in Salado, Texas.  Her abstract expressionism can also be purchased through C. Parker Gallery in Greenwich, Connecticut  and Gagliardi Gallery in London, UK.

GRIFFITH ABSTRACT EXPRESSIONISM
At the core of her success is the fact that Griffith abstract expressionism is stunningly beautiful and emotionally evocative. Griffith abstracts are considered some of the best contemporary abstract expressionism in the world.  The masterful use of color, combined with expert understanding and skill produces paintings that are powerful,bold, and dramatic; others that are peaceful; still others that are mysterious. This  artist allows emotion and experience to flow onto the canvas, and the art becomes more that the sum of its parts.  The paintings take on an enigmatic nature, and interpretation becomes illusive, evolving as it speaks to the cerebral, then connects emotionally, and ultimately calls to the unique nature deep inside the individual.  Interpretations become personal and as diverse as the people who view the paintings.
BIOGRAPHICAL INFORMATION
Becoming an Abstract Expressionist Painter

It is not enough to say that I was born in Texas, U.S.A. and to continue to recite details of my life’s journey.  While you would know some facts, you would not have an understanding of me as an abstract expressionist.  So, I have decided to share some facts that are important.   From the beginning I was taught to appreciate life and to always treat it with care and respect.  As a very young child I was taught how to sit, be still, be silent, to listen, and to observe with all my senses.  I was taught to be acutely aware of my surroundings at all times, to pay attention to every detail, and to notice even the slightest change in temperature, movement, smell, or sound.
Work was valued, and adversity or setbacks were never cause to quit or to give up on attaining a goal.  Assigned tasks were to be efficiently and accurately completed, even if I did not want to do them.    Self discipline, honesty, and integrity were instilled.    There was a time to work and a time to play.
Some of  my first words were, “Why?” and “How does it work?”  This quest for knowledge was cultivated.  I was always encouraged to question, research, analyze, and to never be afraid to repeat the sequence.  There were times when I would ask “What would it be like to be________?  The blank would be filled in with anything from a tree, leaf, insect, rock etc.   My questions were endless.
Color always captivated me.  I was born with the ability to see values and intensities of colors, without knowing the proper nomenclature.  While an undergraduate at Texas Tech University, I took a course in color and design that  was rigorous and very instructive.
Music stirred something deep within me.  At age 7 piano lessons began at my request, and continued for a few years.  Participation in highly  competitive team sports and other youth activities were helpful.
Much later in my life, I decided to learn the basics of oil painting and participated in weekly oil painting classes for a few months. In the mid 1990's  I started to paint full time and began to sell my paintings in the local area.    The focus for the next few years was on learning how to execute highly detailed oil paintings, both with brushes and with palette knives.
From time to time I painted abstracts.  Having no specific training in painting abstracts, I simply did what came natural to me and made no effort to sell them.  By early 2010 the desire to paint abstracts dominated.  A fire that had started small had spread and burned brightly inside me.   I became aware that I will paint abstracts until the day I die.   The decision was made to submit abstracts for an upcoming international show in Las Vegas in 2012.  My work was juried into the show, and  the paintings  were well received by both art critics and collectors. In retrospect, the international show in Las Vegas in December, 2012, marked the beginning of my career as an abstract expressionist painter.
Shortly after the Las Vegas show I received an invitation to submit a portfolio for a show at a gallery in New York City.   I flew to New York for the opening of the show. While I was there, the gallery owner visited with me about my work.  She said she had had some additional experts look my paintings, and that they all agreed that my work was superior quality abstract expressionism. Prior to that moment, I had never referred to my abstracts as abstract expressionism.
Sometime later, I came to the realization that I was born an abstract expressionist painter; I am an abstract expressionist; and I will always be an abstract expressionist painter.   My paintings celebrate colors of the earth and natural rhythms.  They reflect the poetic, the awareness of experience felt in spirit, and the unknowable in physical reality.